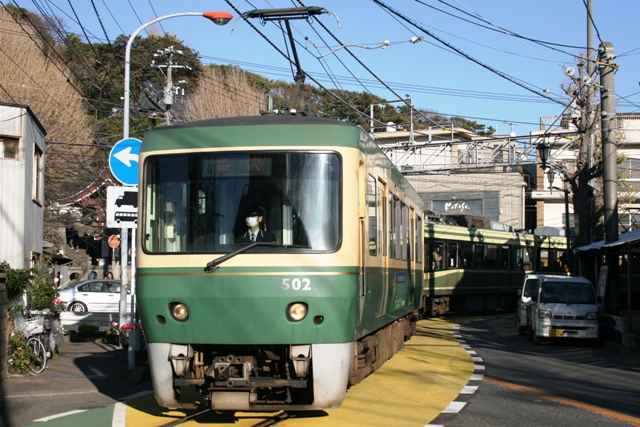 As I mentioned in my July 25th blog, Kamakura, about 40km south of Tokyo, is known as a historic city where the Bakufu (shogunate government) was located from 1185 to 1333. This city is located on the Pacific Ocean to the south. Meanwhile, there are steep mountains to the north, east and west as a natural fortification in the Samurai (warrior) era.

In the meantime, Kamakura is also known for its warm climate. Even in winter, it remains warm in the city. Last week, I revisited there to enjoy the final stage of its "autumn leaves" and tranquil gardens in the Buddhist temples.

I took the Odakyu Line from my stop, Chitose-funabashi and got off at Katase-enoshima Terminal. Then, I transferred to the "Enoden", Enoshima Electric Railway and headed to Kamakura. This time, I rode an EMU 500 series, which is the newest train on the line launched in 2006. It is a two-car train with Jacobs bogie. AC traction motors with VVVF inverter control system are used to promote energy savings (see the top photo).

After arriving at Kamakura Terminal, I visited Myohonji Temple. It was only 10 minutes walk from the station. Although it was the weekend, the precinct of the temple was quiet. I saw very few visitors and only a stray cat. I could focus on stilling the mind and viewing the beautiful "autumn leaves" there (see the bottom photo).

Winter in Kamakura is a best-kept secret. I became a big fan and repeat visitor of Kamakura. 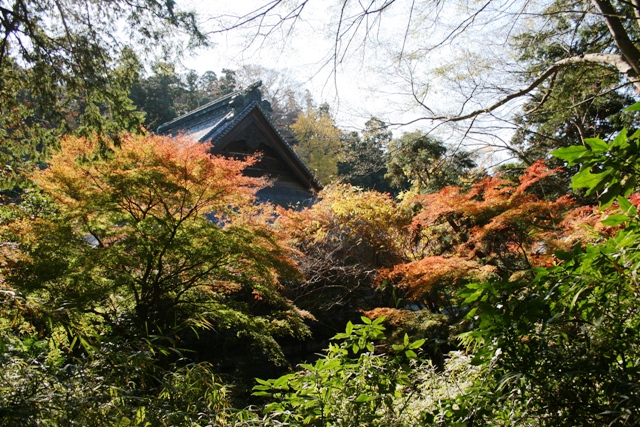