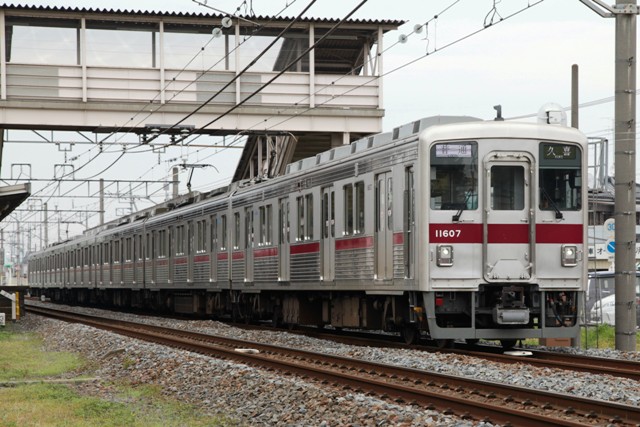 
Shibazakura (lawn cherry) is a cherry-like pink-flowered short grass, which is originally from North America. It blooms in April to May in Japan as a mid-spring flower. Along with Fuji Shibazakura Field (see my blog on December 14th, 2012), Tatebayashi is one of the reputable lawn cherry viewing spots in the Tokyo Metropolitan area. More than 250,000 lawn cherries are growing in the area that covers 8 hectares (see the following picture).

To get to this gorgeous spot, take the Tobu-Isesaki Line, and get off at Morinji-mae Station. It takes about one hour from Kita-Senju, which is a northern terminal of Tokyo Metropolis. The EMU 10000 series is my favorite on this route (see the top photo). It was launched in 1983 as a new generation commuter train on the Tobu Railway. A total of 118 units have been manufactured by Tokyu Sharyo, Alna Sharyo and Fuji Heavy industries.

I like this shining staunch stainless-steel body with corrugations, a group of small air conditioners on the roof and a simple maroon colored body stripe. They are rather old, but nostalgic for me, since it has been a familiar train since I was a student.

For your information, usually, local trains only stop at Morinji-mae Station, but the limited express train "Ryomo" also stops there in the weekend of the peak blooming season of the lawn cherry. I will introduce the limited express on the Tobu-Isesaki Line next time.