Classic EMU JR West 103 series stands at Nara Station
On the last day that we stayed in Nara Prefecture, we visited Todaiji-temple in the eastern part of Nara City. This temple is famous for its Great Buddha, which was made in the mid-700s. The Great Buddha was made of bronze; however, it isn't quite what it used to be, due to Japan's frequent natural calamities. The wooden structure housing the Great Buddha, called Daibutsuden, was also destroyed several times through the centuries. The present structure was made in 1709. It's the largest wooden structure in the world, but is two-thirds its original size.

When we visited Todaiji-temple, I couldn't take pictures as it was raining hard. Alternatively, I am going to show you a picture taken by an Indonesian tourist last November (see the following photo). You can see the Colossal Hall of the Great Buddha that was set off against the beautiful autumn blue sky.

After a visit to Todaiji-temple, we left Nara taking the JR West Nara Line. A sky blue colored classic train, the EMU 103 series was waiting for us at platform number 4 (see the top photo). The 103 series was launched in 1963. It was a standard commuter train on the Japanese National Railways. A total of 3,447 units have been manufactured for 21 years. It has already been retired from the Tokyo metropolitan area; however, we can still see their brothers here in the western part of Japan.

The blue sky and the blue colored train stand out against the city of Nara. 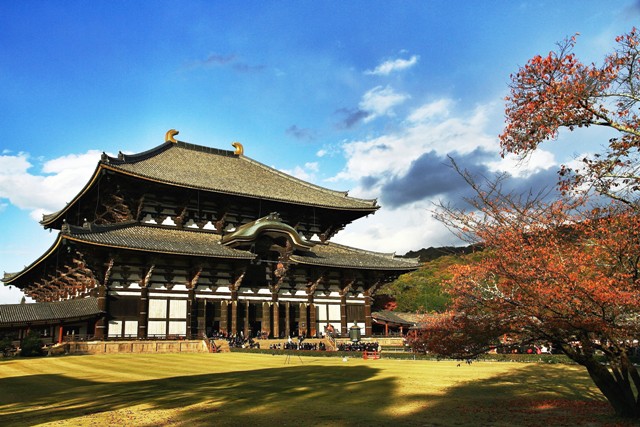