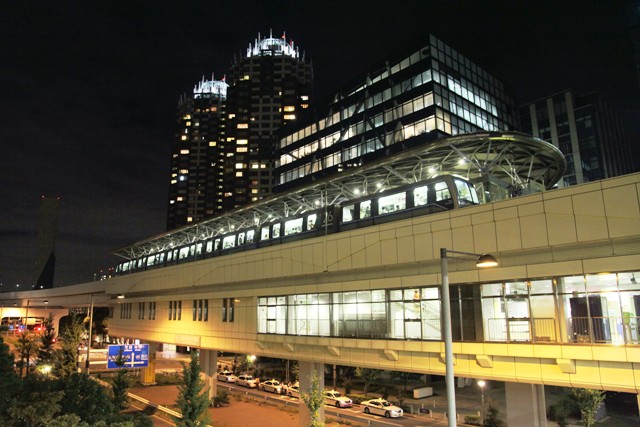 EMU 7200 series stands at Daiba-kaihin-koen Station on the Yurikamome Line
It is early autumn in Tokyo. During the daytime, I feel comfortable when I'm still, but as soon as I start moving around, it gets really hot. So, I find it is better to do a night walk and feel the cool rush of evening air.

A recommended night walk spot is the Tokyo Bay area near the city center. You can enjoy a gorgeous night view on the coast. Look at the following photo. It is Rainbow Bridge connecting the downtown area and New Tokyo Waterfront Subcenter. It was opened in 1993 as a double decked suspension bridge. Currently, Rainbow Bridge is illuminated colorfully in celebration of the decision to host the 2020 Olympic Games.

You can drive through Rainbow Bridge using both the expressway and the ordinary roads; but I recommend you take the Yurikamome Line to enjoy the beautiful night view in the bay area. Yurikamome is an AGT (automated guide way transit) line, which was opened in 1995 between Shimbashi in downtown Tokyo and the New Tokyo Waterfront Subcenter. The current total operating length is 14.7km. It is a small-sized driverless train with rubber-tires instead of steel bogies.

The top photo shows the latest model, the EMU 7200 series standing at Daiba-kaihin-koen Station. This model was launched in 1999 as the second generation train on the line. The major differences from the previously-existing 7000 series are the control system (from thyristor to variable-frequency drive) and an increased number of guide wheels. 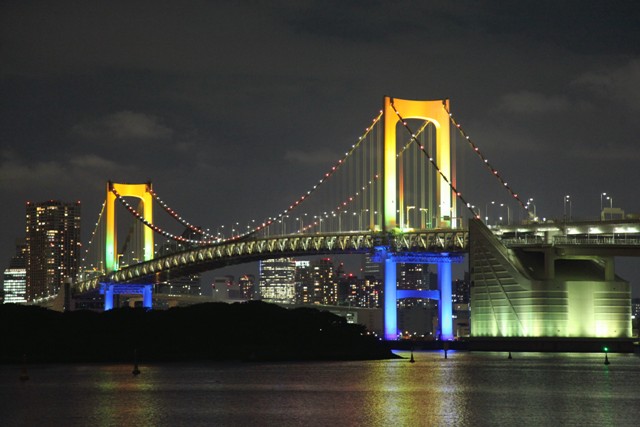 Night view of Rainbow Bridge near Daiba Station on the Yurikamome Line
More information about the Yurikamome trains (in Japanese): http://www.yurikamome.co.jp/contents/hp0082/index.php?No=50&CNo=82﻿