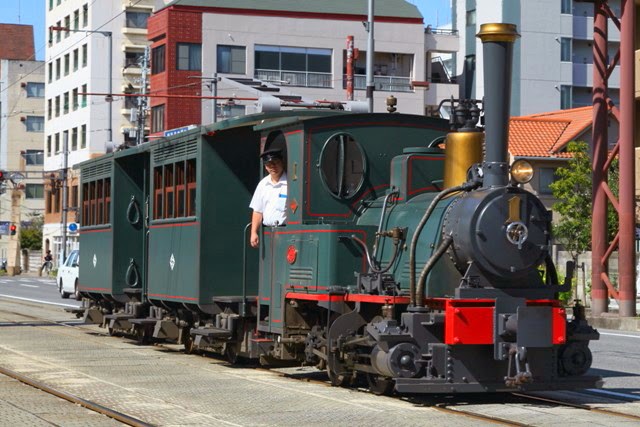 Botchan Train runs on the Matsuyama City Line, Iyo Railway
I visited Ehime Prefecture on family duty last weekend. Ehime is located on Shikoku Island, which is some 700km west of Tokyo. It was a short visit without any train travel, but I could shoot some train photographs, because my family gave me a chance to save my face as a rail fan.

Look at the top photo. It is Botchan Train in Matsuyama City. This train is a revival of the old light railway, which was operated from the 1880s to the 1920s. The operator is a local private company, Iyo Railway. This train has been operated on the city tram line since 2001.

Unfortunately, the steam locomotive (SL) is NOT real. It is a diesel locomotive (DL). Before the introduction of Botchan Train, there was a big argument, since a real SL would cause harm to the urban environment. Needless to say, a SL blows black smoke. Eventually, the railway company decided to manufacture a DL that resembled a SL. For your information, this replica SL blows water vapor from the smokestack instead of black smoke.

Following the classic train, I am going to show you another photogenic object in Ehime Prefecture. Look at the following photo. It is Kurushima Channel Bridge connecting Shikoku and Ooshima islands. This bridge was opened in 1999 as a part of a highway route between Honshu (the Japanese main island) and Shikoku. The total length is 4.1km. It is famous for its night view, being lit up every weekend. 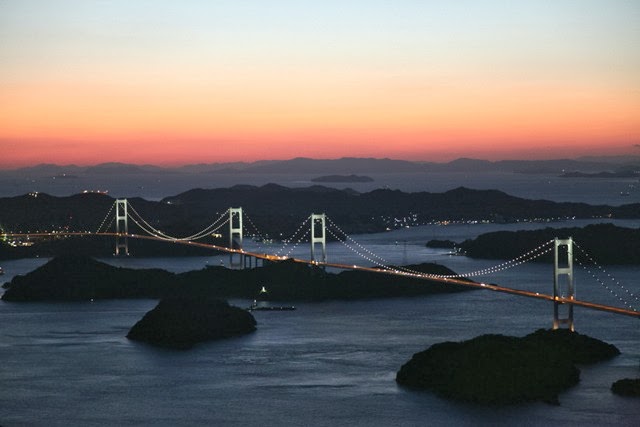