The weather has become gradually cooler, giving Tokyoites a sense of the upcoming autumn. This summer was really sizzling. Visiting a cool environment was my only pleasure. Nagano was the best place.

Nagano Prefecture, which is surrounded by steep mountains, is located some 150km west of Tokyo. Millions of holidaymakers visit this mountain resort prefecture during the summer vacation season, as it is cooler than Tokyo.

I like Kurumayama Highlands on the Chuo Line. It is nearly 2,000m high above the sea, and famous for its beautiful scenery and alpine flora. Here you are afforded a 360-degree panoramic view of Mt. Fuji, the Yatsugatake Mountains and Japan Alps, which defies description.

The railway in Nagano Prefecture is also gorgeous. For instance, as I mentioned in my blog on June 22nd, the trains on the Koumi Line run in the highlands at an elevation of 1345 meters, which is Japan's highest railway track.

When I visited Kurumayama Highlands, I got on a local train on the Chuo Line. The EMU JR East 115 series, the so-called "Nagano color trains," are the major fleet there. They have ivory colored bodies with light blue and emerald colored stripes (see the top photo). It is a standard commuter train, launched in 1963. Nearly 2,000 units have been manufactured for 20 years, but most of them have been scrapped. Currently they are designated as an endangered species by rail-fans.

Autumn is just around the corner. 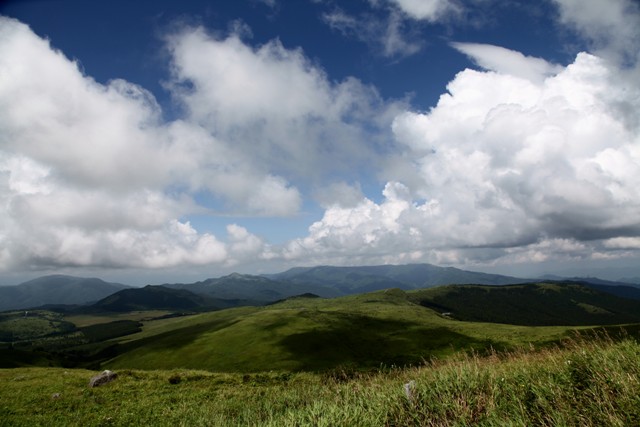