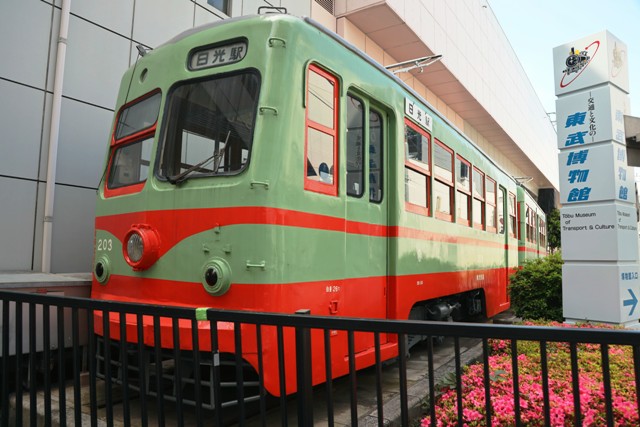 A streetcar, set 203 of the Tobu 200 series, is exhibited in Tobu Museum
After observing a historical steam locomotive, Class B1, in the exhibition hall of Tobu Museum, I moved to the outdoor exhibition area. What first jumped to my eyes was a lovely streetcar, Tobu 200 series, which had been operated on the Nikko tramway.
Let me quickly review the Nikko tramway. It was a tram route partially opened by Nikko Tramway Company in 1910. The route was then fully opened between Nikko-ekimae and Umagaeshi terminals in 1913. The total route length was 9.6 kilometers. The track was 1,067 millimeter-size single and electrified. The electric system was 600 V DC overhead. The main objective of this tramline was to transport tourists to famous sightseeing spots such as Toshogu-temple and Futarasan-shrine. Nikko Tramway Company was taken over by Tobu Railway in 1947. The tramline was unfortunately abolished in 1968 owing to the progress of motorization.
The streetcar, Tobu 200 series, was launched in 1954 to reinforce the transportation capacity on the Nikko tramway. It's an articulated two-car tram, 18.55 meters long, 2.2 meters wide, and 3.702 meters high. 6 sets in total were built by Kisha-seizo. Each set can accommodate up to 150 passengers. With regard to the technical specifications, the 200 series had a dynamic brake system, as the Nikko tramway was a steep mountainous route. After operating for 14 years, the 200 series was retired from the track in 1968, when the Nikko tramway was abolished. Only one set, namely set 203, is preserved in Tobu Museum. 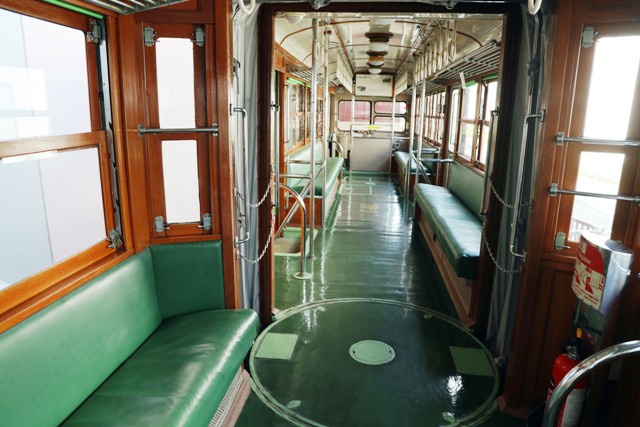