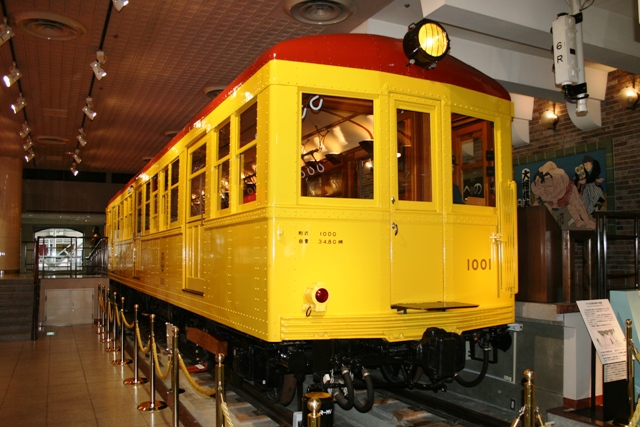 As I mentioned in April 11th’s article, there are several railway museums in the Tokyo metropolitan area. The “Railway Museum” in Saitama City is very famous, because the scale is quite large. Meanwhile, the “Subway Museum”, which is located near Kasai Station on the Tokyo Metro-Tozai Line, is also attractive, because the exhibitions are replete.

The most precious exhibition in the Subway Museum is the Japan’s first subway electric car, No.1001 (see the top photo), which had been operating on the Ginza Line. Japan’s first subway, the Ginza Line was opened between Ueno and Asakusa (2.2km) in the eastern downtown Tokyo area in 1927. The subway electric car No. 1001 was also launched that year. The sills, headers and rivets on the wall looks very tough, but, the yellowish steel body with a reddish brown colored roof looks very elegant. The large round front light is also quite impressive.

Another important display is the “red subway”, the electric car, No. 301 of 300 series (see the bottom photo), which had been running on the Marunouchi Line, also in Tokyo. The Marunouchi Line is Japan’s second oldest subway line that was primarily opened between Ikebukuro and Ochanomizu in the city center area (6.4km) in 1954. The electric car No.301 was also manufactured in the same year. The reddish body with a wavy patterned white stripe seemed to have a strong impact at that time.

No.1001 and 301 electric cars…they are nostalgic and precise exhibitions in the Subway Museum in Tokyo. 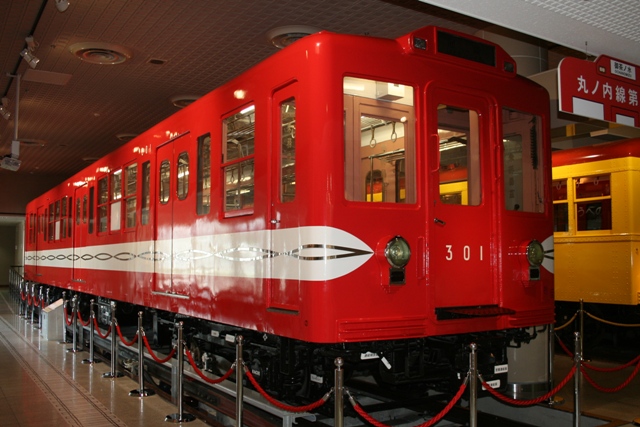